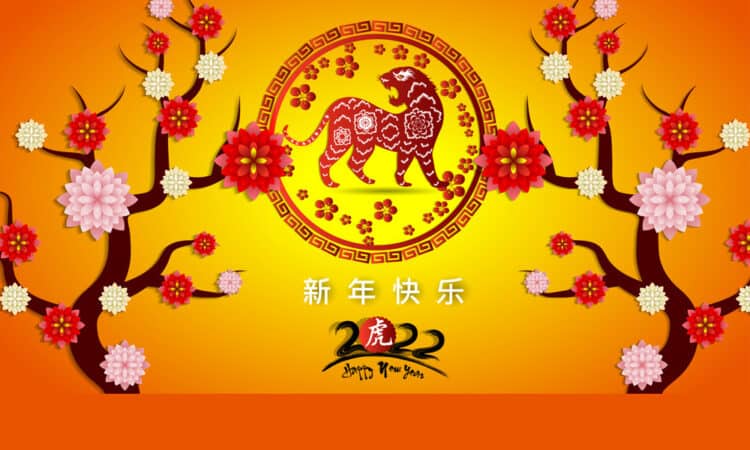 2022 The Year of the Tiger – According to the Chinese Zodiac, the Tiger is the representative sign of 2022, and it belongs to the Water element based on the Chinese Five Elements: Wood, Fire, Earth Metal and Water. Water represents intelligence and wisdom. Water is flexible yet strong, flowing yet still, calm yet dangerous. The year begins February 1st.

In Chinese astrology and Feng Shui, the Water element symbolizes the vital essence, spiritual communication, maturity and deep emotions of this year. Water in its Yang form is characterized by kindness, alertness, memory alertness, curiosity, sense of observation and intuitive intelligence. During this time, people are most suitable in handling disputes because they are the most tender, vital and combat-worthy people who can conquer the unyielding with the yielding.

This will not be an entirely peaceful year. Optimistic, during the year of the Tiger, people have a great deal of spunk and would rather die trying than give up on their ideals. Politically, there will be major realignments, theatrical coups, revolution, prospects of war and positive opportunities. It is definitely a year of action and change!

A Time for Optimism and Empathy!

Those that were born in 1950, 1962, 1974, 1986, 1998, 2010, 2022, and 2034 were born in the Year of the Tiger. Full of life, those born under this sign are fearless, noble and bursting with vigor. They are affectionate, generous and have a great empathy for fellow human beings. Their rebellious nature attracts them to adventure and deeds that call for action instead of deliberation. Optimistic, Tigers have a great lot of spunk and would rather die trying than give up on their ideals.

The Tiger is the third of all Zodiac animals. According to one myth, the Jade Emperor said the order would be decided by the order in which they arrived to his party. The Ox set off the night before and was first. Tiger arrived early the next morning and was second. Rat secretly climbed onto Ox and jumped down when he saw the Jade Emperor. Ox and Tiger were pushed back to second and third. Despite his protests, Tiger could only settle with being the third Zodiac.

The Year of the Tiger will bring a time for love. You may have a crush on someone and fall in unrequited love and your crush will probably know nothing about it. The year brings shyness in expressing your feelings and then you do nothing but suffer from it. But the love may get deeper and deeper and drive you mad. Instead of suffering alone, maybe its time to state your feelings clearly and stop torturing yourself.

Things that will be bring 2022 Tigers luck:

Things that Tigers should avoid:

2022 The Year of the Tiger – Tigers are the Guardians of Children!

In Chinese culture, Tigers are the guardians of infants and children, and Chinese children are often seen sporting tiger-printed garments to protect them from any evil spirits. Tiger energy is believed to guard against the three main things that can bring devastation to any home: fire, thieves and ghosts. Because of the sheer, raw power of the Tiger, this Zodiac sign is honored in China as the ultimate protector of home and hearth.

The Year of the Tiger will bring change. Expenses will soar, and saving money might become difficult. Business people should be wary of their staff who can damage the venture. Relationships will be volatile, and it is essential that you control your anger and avoid quarrels. Singles will be able to get into relationships but should be careful in committing themselves. Health will not pose any problems. If you want to enjoy the year, be modest and diplomatic. Do not get into unnecessary fights over small matters. It’s just not worth it.

During the year of the Tiger, we will have an inborn magnetic personality that attracts people to us like bees to honey. Warm-hearted, sociable and friendly, Tiger people are characterized by their frank, honest and open approach. Their immense kindness and generosity will always shine through except when crossed or backed into a corner, for then they can become vehement and ferocious. The year 2022 brings the Lucky Tiger, which represents the greatest power on earth, and is the emblem of protection for human life.

We are Here for YOU!