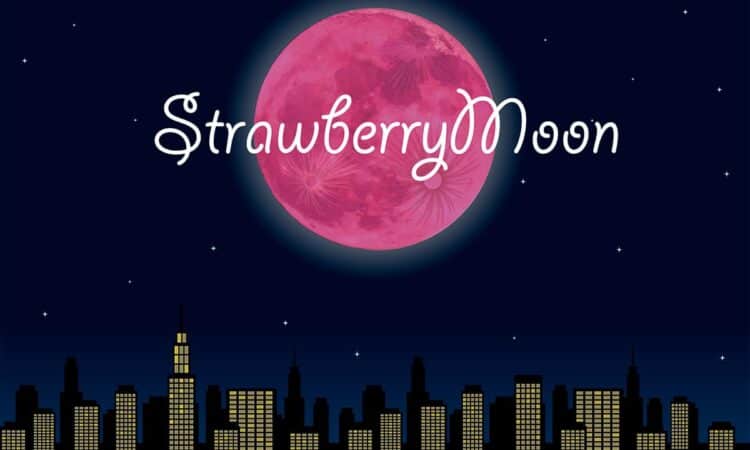 June 2021 Solar Eclipse and Summer Solstice and other astrological events! June 2021 brings many exciting Celestial events! June’s Full Moon in Capricorn traditionally is known as the Full Strawberry Moon as it comes at the time of year when wild strawberries are ripe. We will also experience June’s Summer Solstice!

People in northern Canada, parts of Greenland, and northeastern parts of Russia will be treated to the “ring of fire” that annular solar eclipses are famous for, as the New Moon covers only the Sun’s center. As opposed to a total eclipse when the moon completely obscures the sun’s rays. In an annular eclipse, a circle of the sun’s light—or a “ring of fire”—surrounds the moon’s shadow. The annular solar eclipse on June 10 is the perfect opportunity to photograph a moment that rarely happens. The next one will be on October 14, 2023.

There are reports of increased agitation, unusual dreams, sudden bursts of creativity, and even relationship difficulties during a solar eclipse. There is a definite change in the vibration and frequency of energies on Earth. Seeing as we are all connected and part of these vibrational frequencies, it is likely that we are also going to feel this. Your balance may be affected, or you may feel out of sorts, you may also feel extra sensitive to the energies and emotions of those around you.

Do you want a free online “Love” Tarot Card Reading?

This solstice is the Summer Solstice in the Northern Hemisphere, where it is the longest day of the year. In the Southern Hemisphere, it’s the Winter Solstice and the shortest day of the year. Solstices happen twice a year – in June and December. The June Solstice happens around June 21, when the Sun is directly overhead the Tropic of Cancer. The December solstice takes place around December 21. On this day, the Sun is precisely over the Tropic of Capricorn.

A Solstice Brings the Power of Love !

If you want to live consciously and tap into the solstice energies, promise yourself that over the coming three months, you will pay better attention to how well you are communicating. That means when you’re talking or writing, largely, but also think about non-verbal communication signals you’re sending out (think; crossed arms and eye rolls). This Solstice is known to bring the power of love. Love comes in many forms, and the world could use a lot of it right now. Use this time to become a helper, an encouraging voice and a supportive friend.

June’s Full Moon is often called the Strawberry Full Moon, after the berries that grow in the Northern Hemisphere around this time of the year. Also, the Mead Moon and Honey Moon are old European names for June’s Full Moon, and some believe that it may be related to why the first month of marriage is called the honeymoon, since at least the 1500’s. This may be because of the practice of getting married in the month of June, or because June’s Honey Moon is considered as the “Sweetest Moon of the Year,” possibly due to the honey being ripe and ready for harvest at the end of the month.

Full Moons are celestial flashlights. They expose the good, the bad, and the ugly. Major information, especially pertaining to work and professional aspirations, will be revealed during this upcoming Strawberry Moon, so the best way to prepare is to keep an open mind and heart. Whether you’ve been hiding from some uncomfortable situations in your relationship, or you’ve been doubting yourself when it comes to making major career choices, the Strawberry Moon will show you exactly what’s going on with you, if you are open to it.

The Full Moon’s Spirit of Love !

This month’s Full Moon is traditionally a time of wonder, in which people are encouraged to care for themselves, seek beauty in their surroundings, and, most importantly, incite positive changes in their lives. This is a difficult time for all of us. Try to manifest within your heart and soul the spirit of Love and Light and send it out to the world that is filled with great darkness. Even the tiniest candle can light the darkest room. Let’s all do our part to make this a better, more accepting, world.

Visit Us at Secret Serendipity !