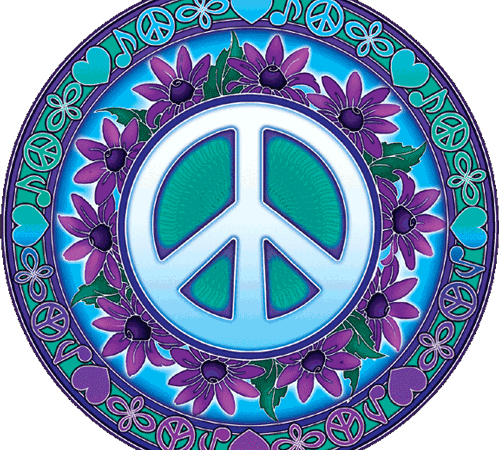 Peace and Love brings us to thoughts of happy times. The 1960’s was a time full of the belief that peace, love and happiness was the way to go. Fashion was freedom. Women had the long, straight hair or the bouffant hairdo, and all contained flowers. Men were happy with their beards, mustaches and long hair. Clothing was bright, and bell-bottoms were everywhere. They were not “hippies”, they were embracers of “flower power.” Tops were tie-died. Peace signs were in all jewelry and on most pieces of clothing. It was a time of freedom of thought, word and deed.

Woodstock was the spot where music happened. The music lifted us higher, and stirred our minds with new ideas. Anti-war songs were much in evidence at the festival, as most were protesting the Vietnam war. British bands, such as the Beatles, became popular for they were far less restricted in their music. Motown in Detroit, Michigan, became popular with its “soul” music. Music of this generation served an integral part of this counterculture movement.

This generation embraced creativity and freedom. This generation began rethinking the direction of American and other democratic societies. Woodstock followers had a common desire to promote peace and love. It has remained to this day as an icon of the cultural movement of the 60’s as it taught us that people who cared enough to do right, could make a better world.

A time like this calls for much peace prayer and peace effort.  All right work and right prayer has effect, all good effort bears good fruit, whether we see the results or not.  In spite of the darkness in the present world situation, I am not discouraged.  I know that just as human life proceeds toward harmony through a series of hills and valleys, so a society has its ups and downs in its search for peace.      ~ Peace Pilgrim (Peace Pilgrim:  Her Life and Works in Her Own Words) ~