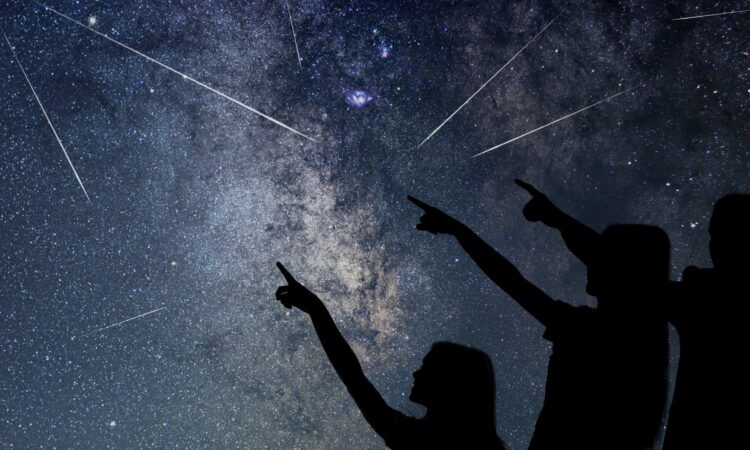 April 22 and 23 2021 Lyrids Meteor Shower – Viewing a spectacular cosmic phenomenon like a meteor shower can remind you of the grandeur and majesty of the Universe. In the past, many Native Americans have referred to the Lyrids Meteor Shower as “the night the stars fell.”

The Lyrids is an average shower, usually producing about 20 meteors per hour at its peak. It is produced by dust particles left behind by comet C/1861 G1 Thatcher, which was discovered in 1861. The shower runs annually from April 16-25. It peaks this year on the night of the 22nd and morning of the 23rd. These meteors can sometimes produce bright dust trails that last for several seconds. Best viewing will be from a dark location after midnight. Meteors will radiate from the constellation Lyra, but can appear anywhere in the sky.

The Lyrids – The Strongest Meteor Shower!

The source of the meteor shower are particles of dust shed by the long-period Comet C/1861 G1 Thatcher. The April Lyrids are the strongest annual shower of meteors from debris of a long-period comet, mainly because as far as other intermediate long-period comets go (200–10,000 years), this one has a relatively short orbital period of about 415 years. The Lyrids have been observed and reported since 687 BC; no other modern shower has been recorded as far back in time.

A meteor shower is a time of reflection and change. The April Lyrids Meteor Shower represents the spiritual insights and wisdom gained from looking deep within the shadows of ourselves and our world. They might be able to ignite our chosen path and guide us through some decisions. Meteor showers also signify the rise of the Phoenix. Something has to end for a new beginning. We rise from the ashes, stronger than before, and wiser in many ways. They also invite us to create new ideas and beliefs. They’re like little bursts of “aha” moments.

Meteor showers represent several things. First of all, they’re cosmic dust, debris. They look like beautiful light displays from our perspective, but in reality, they are a type of storm that happens from the breakup of a comet. To understand the astrological significance of a meteor shower, we need to understand the significance of a comet. Comets are made up of ice, dust, and gasses. If we read that symbolically, we might say they represent our frozen emotions and collective fears surfacing for us to see and heal. Anything we have been ignoring or suppressing can no longer be ignored. To the ancients, a comet represented change, like an eclipse – Intense, but I’m into it.

The Lyrids – What is Hidden will be Brought to Light!

This intense phase, when a meteor shower is in full bloom, will stir emotions and memories that can take us closer to our true selves. It will also be a time when things hidden in our unconscious—our fears, self-doubts, insecurities—will be brought to light. The more we accept these and choose to heal ourselves, the more the transformation will be powerful and enlightening.

Even today, though science has given us rational explanations for the amazing things we see above, we still can’t help but assign mystical and magical qualities to them. And perhaps for good reason. Many believe that cosmic events, like meteor showers, have a strong effect on us. The Lyrids Meteor Shower is believed to light a path to guide us toward the new direction we are seeking.

More on the Lyrids Meteor Shower