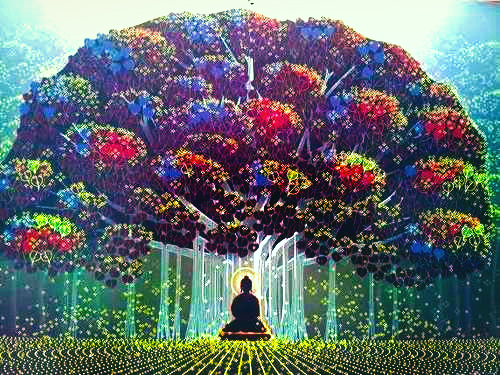 There are many pathways to enlightenment. One of these is in the celebration of Bodhi Day, December 8th, the Day of Enlightenment in the world of Buddhism. The historical Buddha was a prince named Siddhartha Gautama, who was disturbed by thoughts of sickness, old age and death. He gave up his privileged life to become a homeless mendicant, seeking peace of mind. After six years of frustration, he sat under a fig tree and vowed to remain in meditation until he had fulfilled his quest. During this meditation he realized enlightenment and became the Buddha or the one who is awake.

The Buddha lived as a homeless mendicant and walked from village to village, devoting his life to easing the suffering of others. He now believed that he understood the cause of suffering, and how to help people. He was then called Buddha, which means the enlightened one. He journeyed all over India, teaching people. He became one of the world’s greatest teachers, and is one of the most important people who has ever lived.

Bodhi Day is an opportunity to acknowledge the dedication to the principles of wisdom, compassion and kindness of the Buddha’s enlightenment. Because Buddha has experienced his enlightenment sitting under a fig (ficus) tree, fig trees are decorated by many worldwide, with colored lights and three shining ornaments, which represent the jewels of Buddhism. According to tradition, on the eighth morning of his meditation, Siddhartha was offered rice and milk to regain his strength. Many Buddhists start December 8th with this meal as a reminder to meditate and remember their heritage. Heart-shaped cookies are baked as symbols of the ficus leaves.

Living in the light of humility, kindness and compassion is the deep lesson and timeless inspiration of Bodhi Day. To honor this day of awakening, many Zen Buddhists sit in meditation, starting on December 7th until the dawn of the 8th. For Buddhists, the way to start is by being very still and quiet, and emptying their mind of thoughts.

“We are shaped by our thoughts, we become what we think. When the mind is pure, joy follows like a shadow that never leaves.” ~ Buddha

Mindfulness is one of the key philosophies in Buddhism. We at www.secretserendipity.com believe it is time for all of us to slow down, and notice what is happening around us. It is time to live in peace. We should be aware of our attitude and make a point of always treating others with courtesy and respect.