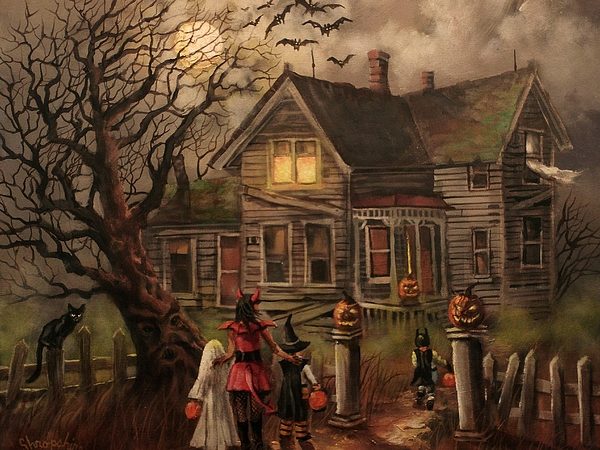 Halloween is celebrated in several countries, most prominently in the USA, and is generally viewed as a fun holiday where kids dress up as ghouls, goblins, ghosts, and pop culture creatures, and collect candy door to door. For most of us, it is a wonderfully frivolous event that allows us to dress up, act like a kid, see the joy on kids’ faces, and decorate our houses. But what is the original meaning and purpose of the holiday?

The word Halloween is derived from the term, “All Hallows Eve,” which occurred on Oct. 31. “All Saints Day” or “All Hallows Day” was the next Day, Nov. 1st. Therefore, Halloween is the eve of All Saints Day. Stories abound that the origin of the holiday began around the time of Christ, but in ancient Ireland and Scotland. At this time of year, the animals were brought into shelters, and crops were harvested. This time of change involved a lot of superstition. This annual change of season and lifestyle was marked by a festival called Samhain, pronounced ‘sow-ane’ (Sow rhymes with cow) which means ‘end of summer.’

Spirits and Fairies of Halloween!

The legend is that during this time of superstition that spirits and fairies were lurking, looking for bodies to inhabit. People would dress up as these spirits, making noises and causing havoc, in an attempt to confuse the spirits and not have their bodies taken over. Old school fairies, like the real ones before the Victorians got to them, were dark, odd things, more about mischief and irrationality than dainty flower people. It was normal for them to be the kind of creature you’d want to appease but also avoid, making sure it knew you were happy to leave out some milk or food for it. But you really didn’t want it coming into your house, spoiling your goods or stealing your babies.

Beginning of Door to Door for Treats!

Later, as the Church spread to the area, November 1st was made into a holiday called “All Saints Day” or “All Hallows Day”. The day before was referred to as “All Hallows Eve” or “Halloween”. Legend has it that a custom developed on this day of going door to door and asking for small cakes in exchange for saying prayers for the recently deceased. It was believed that souls were in limbo, and prayers of the living could help.

The Jack-O-Lantern apparently comes from Irish folklore about a man named Jack who tricked the devil into climbing a tree. Once the devil was in the tree, Jack carved a cross on the trunk preventing the devil from coming down. The devil then made a deal with Jack not to allow Jack into hell after he died if only Jack would remove the cross from the tree. After Jack died, he couldn’t go to hell; and he couldn’t go to heaven. He was forced to wander around the earth with a single candle to light his way. The candle was placed in a turnip to keep it burning longer. When the Irish came to America in the 1800’s, they adopted the pumpkin instead of the turnip. Along with these traditions, they brought the idea that the black cat was considered by some to be reincarnated spirits who had prophetic abilities.

Halloween is Innocent and Fun!

Today, there are no such heavy meanings associated with the holiday. There are no implications involving the dead, or bargains with forces good or evil. Halloween is innocent and fun, and in a world of cynicism, aggression, and overall grumpiness, we should all embrace a holiday where we take off our worry caps and escape for an evening of goofiness and free candy.

How to Make Halloween Strawberry Ghosts!

In a hurry? Substitute mini chocolate chips for the dark chocolate and just place on the white chocolate strawberries for eyes and mouth.