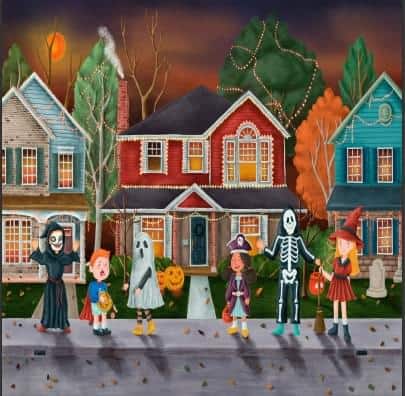 Halloween is a holiday of many mysterious customs.  Children roaming from door to door demanding treats can be traced to the Celtic period and the first few centuries of the Christian era, when it was thought that the souls of the dead were out and around, along with fairies, witches, and demons. Offerings of food and drink were left out to placate them.

The history of the Jack-o’-lantern began in the 18th century with Irish families. They began to put carved-out turnips and other vegetables in their windows, with a hot lump of coal inside to light it up, as a means of preventing a foul-mouthed drunk from the village, Stingy Jack, and other ghouls from entering their homes.  Most had scary faces carved into them to frighten away any comers.

How the Pumpkin Came to Be!

Once the tradition hit the United States, Irish immigrants soon realized that the pumpkin, native to the states, was an ideal fruit for carving.  When European settlers arrived in America, they found that our American pumpkin varieties were well suited to being carved as Jack’s lantern.

Halloween is a Celebration!

Our American pumpkin was found to be large in size, have upright strong walls, and a large hollow cavity… Just what they were looking for. This Halloween pumpkin is hollowed out and cut in order to create a grimacing face and is lit from the inside with a small candle, replacing the burning lump of coal. There was a movement in the late 1800’s to turn Halloween into a celebration emphasizing community and neighborhood activities and parties. This is the Halloween we celebrate today.

Halloween is filled with mystery, magic and superstition. Halloween ghosts and goblins are often depicted as extremely fearsome and scary.  But what about our dreams?  The shadowy ghosts in our dreams represent those aspects that we fear.  This is especially true if there are black cats in the dream, and if we avoid crossing paths with them as we fear that they will bring us bad luck.  To dream of Halloween signifies death and the underworld.  This usually doesn’t mean the death of a person, but a death of an idea or a plan.  Seeing yourself walking through a graveyard on Halloween in a dream might mean that you are reminiscing about a dead loved one or that you are feeling lonely and isolated.

A Halloween dream also represents the adoption of a new persona where we feel less inhibited and more comfortable to freely express who we are.  It is the end of constraint in who we thought we were and the beginning of a new freedom within ourselves.  There are many different energies that make up our psyche and we must accept them all as valid parts of who we are.

Halloween is a Time of Excitement!

Halloween is the celebration of our imagination and willingness to suspend our belief and dance with our neighbors and friends. Halloween is one of the greatest holidays because almost everyone can participate in it. When it comes to donning Halloween gear, there’s a sense of community, of people who all just want to get dressed up in something silly or scary. It is a great time to use your imagination to don a costume that is unique and innovative. It’s our annual chance to live a fantastical existence. Whatever we want to be, we can put on a costume and be it. But for the most part, nothing beats seeing kids all dressed up and excited to go door to door in search of treats. There’s a crisp in the air and a feeling of happiness that peaks on Halloween. Idealistic maybe, but it’s why we will always love the day.

Follow us as we take our journey to wellness at www.secretserendipity.com.

Spread the love
Tags: Halloween - Its Mystery and Magic!