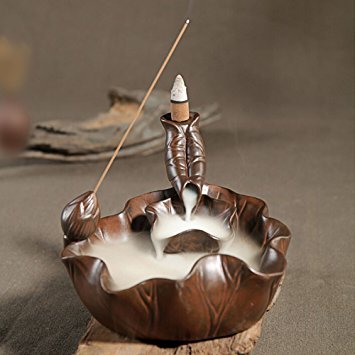 Incense has a long history of being used as a valuable ritual tool.  Incense is associated with the element Air and helps us to create and open the way to a Sacred space.  For many years people have burned magical herbs and aromatic woods to help cleanse, purify and sanctify their homes, temples, and spaces in which they were going to perform rituals.  History tells us that Incense has been used as a sacrifice to both Goddesses and Gods, as a smudge to help drive away evil spirits, and as a tool to draw in good luck, love and wealth.

Incense comes in many forms.  Some are more popular than others, but each type has a use that is traditional in its own culture.  Natural incenses are made of dried tree resins, wood chips or herb pieces.  Coil incense is able to burn for an extended period of time, from hours to days, and is used in the Chinese culture.   Cone Incense burns relatively fast.  Incense cones were invented in Japan in the 1800’s.  Cored stick Incense has a supporting core of bamboo.  They are the most used incense, and sandalwood is the most popular scent.  Core incense is commonly produced in India and China.

The up-and-coming New Age form of burning incense is by Smudging.  Smudge Sticks are bunches of dried herbs, such as sage, that are lit at the tip and then they slowly smolder as they burn.  White Sage is popular in Smudging as it is used for cleansing and purifying among many Native Americans.

Join us at www.secretserendipity.com as we take our journey to wellness.  Read more detailed information on Incense and the many ways it can enrich your life.