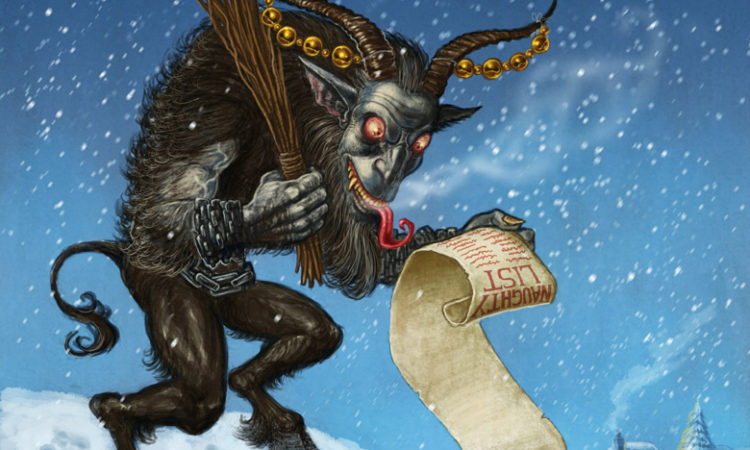 Who is this pop-culture, Krazy Santa, that everyone seems to be talking about lately? Krampus is the name he is known by and he appears to be a deamon-like half goat, hairy creature, who during the Christmas season, punishes children who have been naughty. He is just the opposite of St. Nicholas, who rewards the well-behaved with gifts. Word has it that on December 5th, Krampus appears on city streets, sometimes accompanying St. Nicholas and sometimes on his own. Unlike the North American versions of Santa Claus, in these celebrations St. Nicholas concerns himself only with the good children, while Krampus is responsible for the bad. He visits homes and businesses. Krampus supplies coal to the stockings of misbehaving children. If a child has been naughty, Krampus will take any Christmas gifts for himself.

Originating in Germany and according to forklore, on St. Nicholas Day morning, December 6th, children look outside their door to see if the boot they left out the night before contains either presents for good behavior or a rod or coal for bad behavior.

His name originates with the German Krampen, which means “claw,” and he is said to be the son of the Norse god of the underworld, Hel. Krampus has become a much-feared and beloved holiday force all around the world. The Krampus creature has starred in a comic book, inspired parties and parades across the U.S., and even appeared in movies.

Krampus-related events and parades occur both in North America and Europe and they are an ever-growing phenomenon. During the parades, Krampus of legend whips people with his birch bundle. Many people are caught unaware and react with horror, so beware. The masks worn in parades are made of wood, hand-carved by specialists, and usually wind up in museums.

The Krampen movement extends a sort of Halloween festivity into December. Krampus followers in costumes have been known to knock on doors, sing songs, and demand treats. They then run through the streets laughing. But regardless of how he looks, there is a Spiritual side to Krampus. His function is to scare little children and adults in order to entice them into being well behaved. He plants the seeds of realization about how petty they have been, how they have failed to love well and be thankful. Krampus shows up when people have lost all vestiges of the true Christmas Spirit.

We at www.secretserendipity.com are willing to give to others during this holiday season, sacrifice for the good of our fellow man, pray for world peace, and keep on believing in the true meaning of Christmas. We want no coal from Krampus.