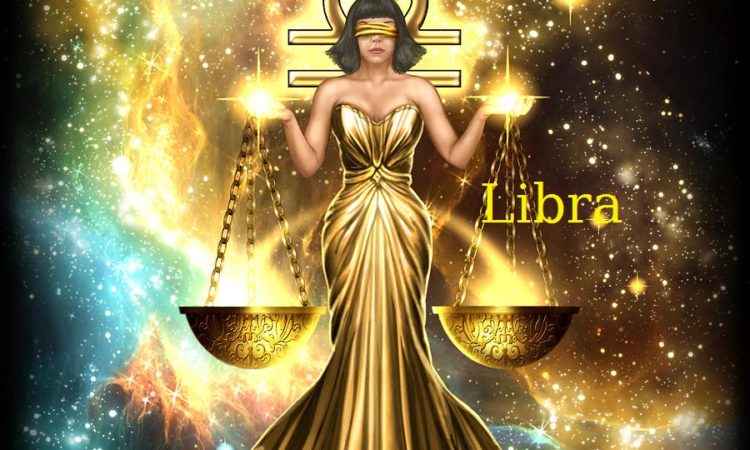 Libra is the seventh sign of the Zodiac and the second of the air triplicity, Gemini being the first and Aquarius the third. It is under the rulership of Venus. The name, Libra, is a Latin word meaning scales or balance. It also represents pound. Pound is the unit of weight for the scales. A pair of Scales is the glyph for this sign.

The Astrological sign, Libra, is in the time of the Fall Equinox, when the Sun starts on its journey south of the equator. This equinox begins approximately on September 22nd. At this time the days and nights are everywhere equal, the same as at the Spring or vernal equinox.

Ancient astrologers believe that sodium or natrium phosphate holds the balance between acids and the normal fluids of the human body. Acid is organic and can be chemically split into two or more elements, thus destroying the formula that makes the chemical rate of motion called acid. A certain amount of acid is always present in the blood, nerves, stomach and liver fluids. They believed that hate, envy, criticism, jealousy, competition, selfishness, war, suicide and murder were largely caused by acid conditions of the blood, producing changes by chemical poisons and irritation of the brain cells, according to the arrangement of chemical molecules in the wondrous laboratory of the soul.

The Astrological sign, Libra has to do with the kidneys, adrenal glands and bladder, which constitute the last of the vital organs and the the vital part of the body. This represents the time when vegetation begins to look lifeless and drab. As autumn is the harvesting time, Nature is concentrating on pouring forth again in the spring.

The full Moon at this period of the year is of special importance, for its effect on wildlife of the forest is very remarkable. Ancient astrologers believed that under the influence of this harmonizing or balancing Moon, animals that are natural enemies will play together, or pass by without conflict. They resume their warfare when the full Moon passes. 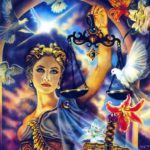 In the Zodiac symbol of ancient times, the woman, Venus, is seen full face, and wearing an iron coronet. She is seated upon a throne, and is placed between the two columns of the temple. The solar cross is traced upon her breast. She holds a sword, pointed upward in her right hand, and a scale in her left. The sword is symbolical of the straight and narrow way above. Her position between the two columns of the temple signifies her importance in respect to the attainment of equilibrium. And the solar cross on her breast refers to the association with the cardinal or creative cross of the year.

Venus, the ruler of Libra, was said by the ancients to have arisen from the foam of the sea at the time of the wounding of Uranus. The seductive form and the beauty and fascination of those born under the planet of Venus, inevitably lead to severe tests of their moral equilibrium. Venus tends to lead one into excesses.

In Bible alchemy, Libra represents Reuben, the first son of Jacob. Reuben means Vision of the Sun. Reuben dabbled in sin, which left an indellible mark upon him and his family. But when he learned about the plot against Joseph, he persuaded the others not to kill Joseph and shielded him from harm. He had a strong sense of responsibility.

In the symbolism of the New Testament, Libra corresponds to the disciple, Peter. Peter is derived from Petra, a stone or mineral. Peter, when in the presence of pure holiness, became humble, which made him the perfect candidate to be a “fisher of men.” Throughout his time with Jesus, Peter was always trying to prove himself and his loyalty. The irony is that Jesus knew it was in there the whole time. Loyalty is important to those born under the astrological sign, Libra.