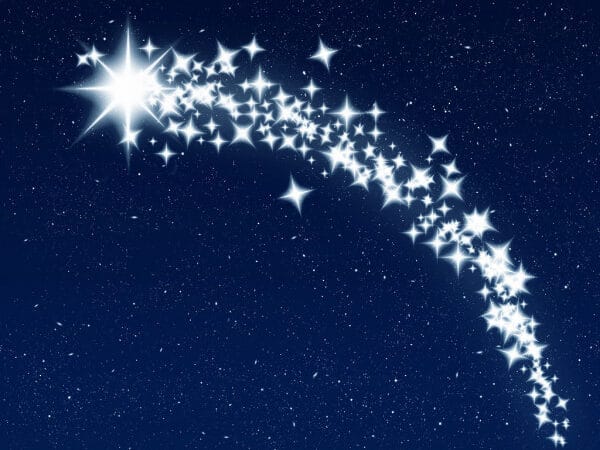 April 22 2021 Lyrids Meteor Shower, at pre-dawn, the Lyrids Meteor Shower will peak. The Lyrid meteor shower runs annually, and this year will run from April 16-25, peaking on the night of April 22 and the morning of April 23. The best time to watch is between midnight and dawn and, with fingers crossed for a cloud-free sky, it should be quite a spectacular show.

The radiant of the Lyrids Meteor Shower is located in the constellation Lyra, near its brightest star, Vega. The peak of the shower is typically around April 22 each year. You don’t need to identify Vega or Lyra in order to watch the Lyrids Meteor Shower. The meteors radiate from there, but will appear unexpectedly, in any and all parts of the sky. The Lyrids can produce up to 18 meteors per hour at the peak, with occasional fireballs. Most of the meteors will appear between midnight and dawn on Thursday, with a reasonable number of meteors on the mornings before and after, too.

The word “star” in “shooting star” or “falling star” is actually not totally accurate. Technically, it’s not the star that “shoots,” but a burning bit of rock and dust that shine in the dark sky. When meteors fall, they burn and accelerate towards the earth, thus being called shooting stars. The chances of seeing at least one shooting star during the Lyrids Meteor Shower, in a given hour between midnight and sunrise is 84%.

While meteor showers usually radiate from a particular direction, they can hit the atmosphere anywhere, so look for them all over the night sky. They are best viewed away from town, where there is minimal light. When meteorites do hit the ground, their speed is roughly half what it was upon entry, and they blast out craters 12 to 20 times their size. Craters on Earth form much as they would on the Moon or any rocky planet. Smaller objects create bowl-shaped craters.

Given the magic associated with shooting stars, it’s no surprise that there’s more than one superstition linked to them. While many cultures suggest that gazing upon these stars brings good luck, some believe you can use shooting stars for more precise purposes. Worried about your empty wallet? Park yourself outside on a starry night and wait for a fallen star. If you say the word “money” three times before the star burns out, you’ll soon be on your way out of poverty. [source: Webster]

The Magic and Superstitions!

Even stationary stars can boost your luck, at least according to folklore. In particular, the first star that shines in the night sky each evening possesses special magic. In England and some other parts of the world, setting your gaze on the first star that appears after dark and making a wish is enough to win your heart’s desire. In other cultures, you must recite a particular nursery rhyme or poem as you silently focus on your wish. This superstition is associated with the “Star Light, Star Bright” nursery rhyme popular among children and parents. [Source: Webster]

It’s well established that attempting to count the stars can be unlucky, but one superstition holds that it’s OK to count under very specific circumstances. According to folklore, only an unmarried person looking for love can keep a tally. Even in this case, the unmarried person can count a maximum of seven stars on seven consecutive nights. If you do this, the first person of your preferred sex that you shake hands with on the eighth day is the one you’ll marry.

The spiritual meaning behind meteor showers started in ancient times. Objects or lights in the sky were associated with Gods or had a religious meaning. Specifically, seeing a meteor suggested that a gift was given by heaven. It often represented a mystery coming from some incredible force larger than ourselves, the cosmos. A meteor represented awareness of recognition of something beyond our present experience. Some see it as a soul or spirit. Whatever one imagines it as, tends to become their reality.

Follow us at Secret Serendipity for We Believe in the Power of the Universe!