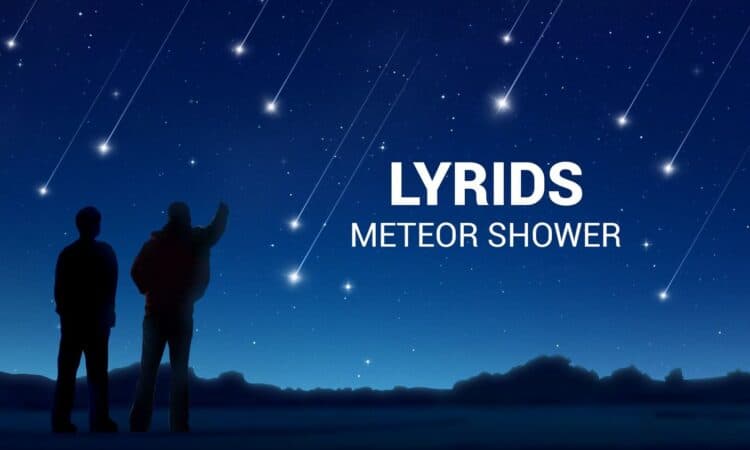 Lyrids Meteor Shower- The Lyrids are known for their fast and bright meteors. Named after constellation Lyra, the Lyrids are one of the oldest recorded meteor showers.

Lyrids Meteor Shower Is a Beautiful Sight to Behold!

Lyrids can surprise watchers with as many as 100 meteors seen per hour. No matter where you are on Earth, the greatest number of meteors tend to fall during the few hours before dawn.

The Glowing Lights of the Lyrids Meteor Shower!

Meteors are small chucks of debris left in the wake of certain celestial objects, like asteroids or comets. When the Earth passes through this trail of material, it scoops up a number of these pieces which fall into the atmosphere. About a quarter of Lyrid meteors leave persistent trains. A meteor train is an ionized gas trail that glows for a few seconds after the meteor has passed.

The Lyrids Meteor Shower is produced by dust particles left behind by comet C/1861 G1 Thatcher, which was discovered in 1861. These meteors can sometimes produce bright dust trails that last for several seconds. The nearly New Moon will ensure dark skies for what should be a good show this year. Best viewing will be from a dark location after midnight.

Lyrids Meteor Shower- The Radiant Star Vega and the Harp!

Lyra is a magical instrument crafted by the God Hermes (Mercury) himself and gave it to his brother, God of Sun, Arts and Witchcraft Apollo. The Music Played by this instrument was so divine that all creatures would be mesmerized when they heard it.

Everything that exists within our Universe has manifested from Source energy, which is also known as “metaphysical energy.” Since ancient times, any entity lighting up the skies has held spiritual meaning, as they were believed to be Divine messengers sent from the cosmos. Every particle of light we see is made up from photons, which are believed to hold multi-dimensional energy traveling through space, containing data and information possibly from millions of years ago.

A time to Voice One’s Wishes!

In ancient times, it was thought that the gods, overwhelmed with curiosity, would sometimes look at the Earth from between the spheres, and that in that instant a star or two might slip through the gap and become visible as a falling or shooting star. Since the gods were clearly peering down at that very moment, it was considered an excellent opportunity to voice one’s wishes with the guarantee that the gods would hear them.

Lyrids Meteor Shower Lights a Path to Guide Us!

Even today, though science has given us rational explanations for the amazing things we see above, we still can’t help but assign mystical and magical qualities to them. And perhaps for good reason. Many believe that cosmic events, like meteor showers, have a strong effect on us. For instance, the Lyrids Meteor Shower is believed to light a path to guide us toward the new direction we may be seeking.