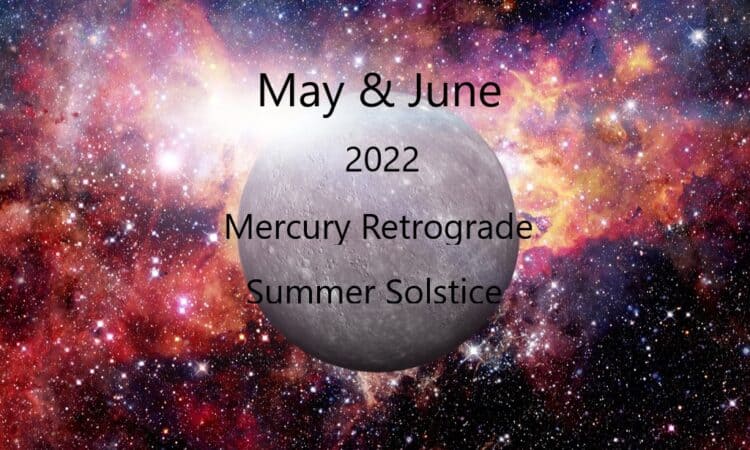 May and June 2022 – Mercury Retrograde and Summer Solstice – Mercury started its Retrograde Motion on May 10 and continues into the month of June. It is believed that we are all influenced by the effect of Mercury in Retrograde. When Mercury is Retrograde, it is moving slower than Earth around the Sun. (Mercury usually moves 88 days around the Sun versus the 365 days that Earth does.) This creates an optical illusion in which we think that Mercury is moving backward.

Mercury Retrograde Begins in May!

Mercury is the planet of communication, the mind, intelligence, connection, media, technology and commerce. It is the fastest moving celestial body in our sky, second only to the Moon. Mercury is known as a personal planet, which means that it affects us significantly within our day-to-day lives. Since everything that Mercury rules is so integral to our daily routines, we notice the effects of any of these retrogrades very potently.

Mercury Retrograde Has Us Staying Put!

Mercury goes Retrograde three times every year. As it slows down before the Retrograde period, we call it the Pre-Retrograde. Mercury starts losing power then and hence new ventures cannot do well in this period. Then there is the Post-Retrograde when Mercury picks up or gains speed but is still moving slowly enough to cause a slow progress in the projects undertaken. During the Mercury Retrograde period it is advised not to venture into any new territory and to stay put. Actually Mercury keeps going around the Sun, always in the same direction and more or less at the same speed. Knowing the Mercury retrograde periods can help you to plan your ventures in advance so that they do not go off-track.

When Mercury is Retrograde, try to remain flexible, patient, and understanding, allow extra time for travel, and avoid signing onto any new contracts that you’re unsure of. Double check your email responses and check in with reservations before you take that trip. Revisiting old projects can help you put the finishing touches on any work that’s fallen to the wayside, as this is a perfect time to edit and tie up loose ends. Find a few crystals, sip some tea and stay one step ahead of the planet.

The June Solstice occurs on Tuesday, June 21. This solstice marks the official beginning of Summer in the Northern Hemisphere, occurring when Earth arrives at the point in its orbit where the North Pole is at its maximum tilt (about 23.5 degrees) toward the Sun, resulting in the longest day and shortest night of the calendar year. By longest day, we mean the longest period of sunlight hours.

The word Solstice comes from the Latin ‘solstitium’ meaning ‘Sun stands still’ because the movement of the Sun’s path north or south appears to stop before changing direction. It is also time to understand that the Sun will now begin to decline once more towards winter – and that balance will be restored to the world. It’s a time of meaning and great significance for many, so it should come as no surprise to hear that it can affect our horoscopes, too.

The Sun and Mercury Join at this Time!

The Sun (ego) and Mercury (communications) are together at this time. This suggests that “better communications” is going to be a theme in the world and also in our personal lives. If you want to live consciously and tap into the solstice energies, promise yourself that over the coming three months, you will pay better attention to how well you’re communicating. That means when you’re talking or writing, pay attention. Also think about non-verbal communication signals you’re sending out (think; crossed arms and eye rolls). Take a moment to reflect. Mercury Retrograde can be an excellent time to take a step back and re-analyze who you are and what you are doing.

Brings the Magic of the Power of Love!

The June Solstice chart has an awesome Venus/Pluto link on it. In theory this can show us all the magic (Pluto) of the power of love (Venus). The message is that love can change everything. That means in your own life and also on a global scale. Love comes in many forms, and the world could use a lot of it right now. Use this time to become a helper, an encouraging voice and a supportive friend. Above all else, be mindful of what you say, share and read about others – and remember that solidarity and friendship are crucial tools in these dark times. Know that things will get better.

Summer Solstice is all About Connections!

Expect your curiosities to be piqued this season. You have the Moon to thank for that! In the astrological chart of the Summer Solstice, the Moon will be in Scorpio. As an emotional water sign, Scorpio likes to go deep and explore life’s depths as well as taboo topics. Now could be the time to meet new friends and deepen existing relationships. Summer is all about connection. With both luminaries in water signs (the Sun will be entering Cancer), we can expect to be immersed in feelings, deep emotions, and creative endeavors. Make sure to go out and about for there is someone out there you are destined to meet.

Join us at Secret Serendipity for More Insights!