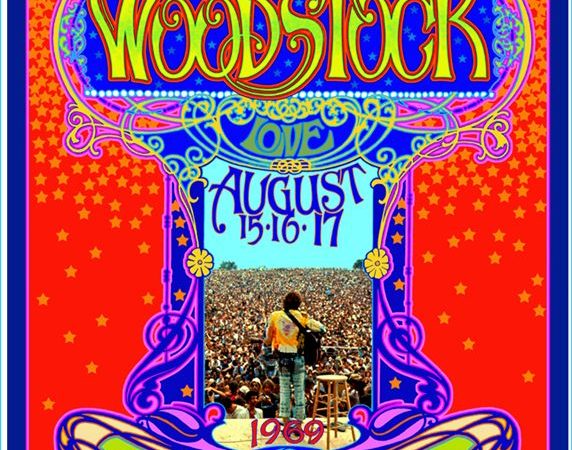 Woodstock defined a generation.  Generations since have been trying to duplicate the experience, with little success.  During the sometimes rainy weekend, thirty-two acts performed outdoors in front of 500,000 concert goers.  It is widely regarded as one of the greatest and most pivotal moments in popular music history and was listed among Rolling Stone’s 50 Moments That Changed the History of Rock and Roll.

It was the Summer of 1969 when almost half a million people descended on a farm in upstate New York to enjoy this music festival called Woodstock.  The 1960’s were filled with anger, confusion and a lot of peace.  There were wars, including the Vietnam War, civil rights riots and social revolutions, along with a generation of American youth looking for their identity.  Kids were rebelling against their own parents and police against kids.

For the 60’s generation, music was their refuge, and they found their great escape at this farm in Bethel, N.Y.  Defining music moments happened at Woodstock.  Among the weekend’s performers were now legendary musicians, including Jimi Hendrix, Janis Joplin and Joan Baez.  The real stars of Woodstock were the half a million people who came for Peace, Love and Music.  Concert-goers didn’t have bathrooms or food, but stayed despite the conditions, even withstanding a storm.

No one, including promoters, anybody going to it, and anybody performing at it, had any idea that the weekend was going to be as big as it was.  Woodstock definitely defined this generation, it gave this generation the freedom to embrace Peace, Love and Music forever.  Peace signs were worn by everyone for years, bell bottoms were embraced, incense was the norm, and psychedelic everything was the rage.

Music enabled the generation to feel the rapture of being alive.  Join us on this journey of Peace, Love and Music at https://secretserendipity.com/.