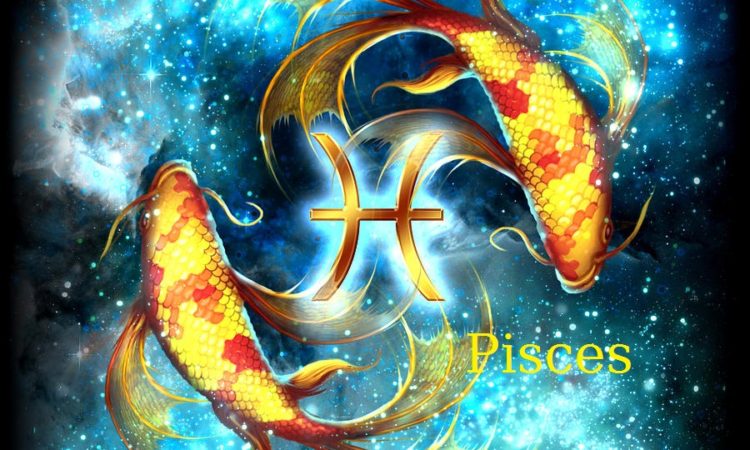 The Sun enters the zodiacal sign of Pisces on approximately February 20, and remains until March 21. This period covers the last week of February and the first two weeks of March. The month of March, in which the largest part of this sign falls, is derived from the Latin word margo, meaning boundary, confine, border, edge, limit, attainment, mark, or extremity. 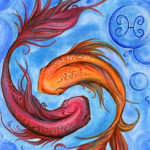 The sign Pisces is said in astrological lore, to pertain to the feet, physiologically, and is concerned with the following: enemies, prisons, hospitals, limitations, the sea, water and all places of confinement. The Dark Warrior is a name for Pisces, since the life or contending force is hidden within the germ cells of the body. The word extremity is frequently used when speaking of the feet. Pisces is the last sign, the foundation on which the entire body rests. Metaphysically, Pisces relates to understanding. When the understanding is active, one can travel far mentally.

Pisces contains the gauge by which all life is measured. The three decans of this sign represent Degeneration, Generation and Regeneration. Astrological lore informs us that Pisces stands for the end of things. As heel means end, this is the reason why the back part of the foot, which is the end of the body, is termed the heel. The head is the beginning of the body, while the extremities constitute the end.

Pisces is the last sign of the zodiac and marks the point or boundary where the circle of life is cemented together. It is life itself. The ancients perceived Pisces as confinement. This is because it is analogous to the deep, the bottom, the pit. Below this, no one is able to go.

The word march, as in the month of March, means to set out. This refers to a great mystery, for there are two journeys which may be considered. The first is the setting out of the Spirit into physical manifestation, from the realm of the invisible. Orders are received to enter again into the material body, and begin the March of Life once more, to begin again the work of building a better vehicle.

Pisces also was believed to be involved with the arterial blood, for it is the blood into which air or oxygen enters. The entering of air into the blood via the lungs has been previously referred to as the miracle at the marriage feast, when Jesus turned water into wine. 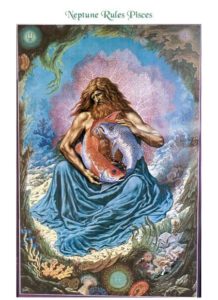 Neptune is the positive ruler of Pisces. It represents the rate of vibration which alone is capable of performing true Piscean work. Neptune is the most remote planet in our solar system. Fourteen years are required for it to transit each sign, thus making the circuit of the zodiac in one hundred and sixty-eight years. In Greek mythology, Neptune is the sea, the divine monarch of the ocean. The ancients pictured Neptune a having his palace in the depths of the sea, but he made his home on Olympus when he chose.

The ancients pictured the two fishes of Pisces bonded together, the bond or ribbon running to Cetus, the Sea Monster, with one foot of the Lamb tangled in its double end. Pisces is also the God Dagon of the Philistines. The first decan of Pisces contains the cord or band holding the fishes and held by the Lamb, its double end fast to the neck of Cetus the Dolphin, which is sacred to the Sun. It is the two fishes with which Jesus fed five thousand people.  The second decan of this sign is Cepheus, a crowned King, holding a band or scepter.  The third and last decan of Pisces contains Andromeda, a woman in chains and threatened by the serpents in the head of Medusa.

In Bible Alchemy, Pisces represents Naphthali, the sixth son of Jacob and means “wrestlings of God.” In the symbolism of the New Testament, Pisces corresponds to the disciple Philip. The birth of Benjamin is given in that wonderful allegory, the thirty-fifth chapter of Genesis. Benjamin is, therefore, the thirteenth child of Jacob. The true Piscean is gentle, kindly, Christ-like in thought and deed. It is difficult for someone born under the Pisces sign to create an enemy.