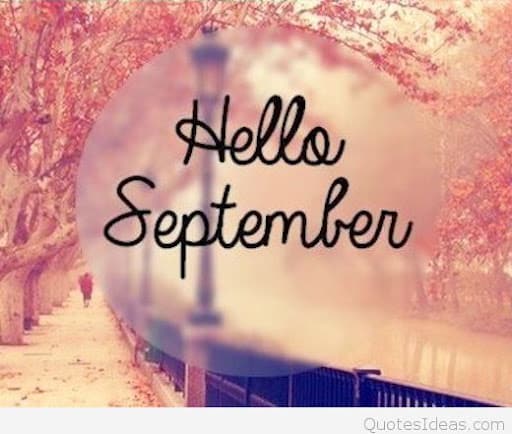 Ruled by Mercury and with the added element of Earth, September can be a month of pressure, mental tension and feelings of disquiet. It’s time to get around positive, nourishing and encouraging people that have the capacity to support us and add to our state of harmony rather than deplete us and knock us off kilter.

September comes from the Latin word septem, meaning “seven,” because it was the seventh month of the early Roman calendar. Names for September have been derived from farming activities at this time of year. During Charlemagne’s time and in Switzerland, it was called the “Harvest Month.” Meanwhile the Anglo-Saxons focused on one crop calling it Barley Month. The idea of September representing in gathering and abundance remains to this day. The September Equinox takes place in this month, and certain observances are organized around it. It is the Autumn Equinox in the Northern Hemisphere, and the Vernal Equinox in the Southern Hemisphere.

The two zodiac signs associated with the month of September are Virgo and Libra. Virgo (September 1st to the 22 ) is a time to pay attention to small details. Our approach to life should ensure that nothing is left to chance. It is a time to be tender, but your heart might be closed for the outer world. Libra begins on September 23. The sign of Libra is an Air sign and brings a time of constant mental stimuli, strong intellect and a keen mind. It is a time of being inspired by good books, insurmountable discussions and intermingling with people who have a lot to say.

This Full Moon was known by early Native American tribes as the “Full Corn Moon” because the corn is harvested around this time of year. The astronomical seasons do not match up with the lunar month. Therefore, the month of the Full Corn or Harvest Moon varies. Usually, it occurs in September, as it does this month. The Full Moon is also called the “Dying Grass Moon” as it plays into the theme of the changing seasons. At this time of year, crops such as corn, pumpkins, squash, and wild rice are ready for gathering. Most often, the September Full Moon is actually the Harvest Moon, in addition to being named the Dying Grass Moon. In two years out of three, the Harvest Moon comes in September, but in some years it occurs in October.

September and the Dreamer!

September is the month for the “Dreamer!” Our ideas are original and ahead of our time. When we are positive and enthusiastic about a project, we have the ability to project this and excite others. We possess depth of vision, but the dreamer side of our nature is compassionate and idealistic. We will learn from yesterday, live for today, and hope for tomorrow. “The future belongs to those who believe in the beauty of their dreams.” ~Eleanor Roosevelt

Summer is ending and the first awareness of the coming harvest is in the air. It is a time to understand that to have our own needs met, we must serve others in some way. Volunteering can help counteract the effects of stress, anger, and anxiety. Nothing relieves stress better than a meaningful connection to another person. It’s a time to show kindness to others. September is a month to bring order out of confusion. If you aren’t where you want to be in life and you want to make a change, then the first step is really knowing that it’s never too late. Today is just as great of a day to start as any other. Harmony is coming into our lives. When we have a positive focus, then we will tend to attract more positive things. Whereas if we have a negative focus, then we will attract negative things. We know this and are now taking control over where we focus our attention. Where attention goes, energy flows.

September brings awareness. It is important that we receive respect and are not taken for granted. We feel generous and supportive with the people we love, so it’s time to do something special for them. September brings the ability to make loyal friends as we look for stability and security in our relationships. Having an active social life can bolster our immune system and help reduce isolation, a major contributing factor to depression.

Sapphire, the birthstone of September, is most desired in its pure, rich blue color but is present in almost every color including pink, yellow and green. In the Middle Ages the gem was believed to protect those close to you from harm and also represented loyalty and trust. The sapphire has for a long time, been identified with chastity, piety, and repentance. It brings wisdom and truth, increases perception and the understanding of justice. It helps find peace of mind and serenity and promotes a life of sincerity, helping preserve one’s innocence while learning life’s truths. Sapphires also are associated with romantic love, representing fidelity and romantic devotion.

September is considered a power month in numerology as it holds the vibration of the number 9. The Number 9 represents transitions and endings. It is the last stage before a new cycle begins. It is also a powerful number of creation. Number Nine’s meaning calls for you to consider all the changes that are happening in your life and is a call to action. After transformation takes place usually, you’re are in a better place to manifest your desires. Number Nine represents manifestation. Number nine is associated with the color gold. It is all about joy, happiness, compassion and universal love. It signifies love, Karma, spiritual enlightenment, awakening, and faith.