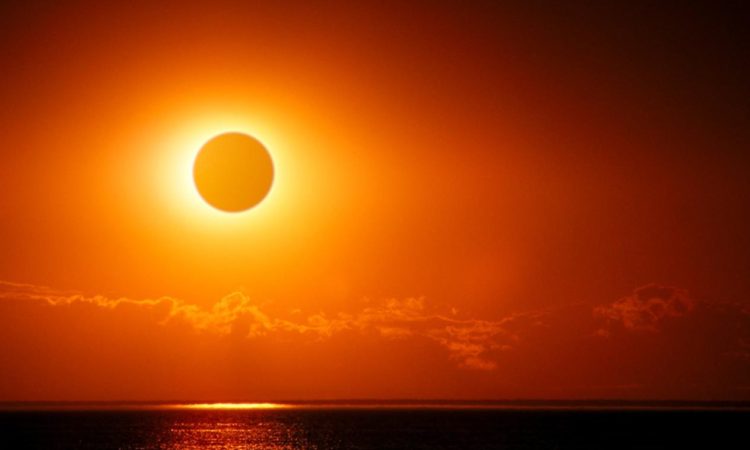 In the direct shadow of the moon, the sky on Earth will darken in what is known as the umbra. Only those located in the path of the Moon’s full shadow, its umbra, can see a total solar eclipse. The Moon’s umbra travels eastward at about 1,700 km/h (1,056 mph).

The total phase of a solar eclipse is very brief. It rarely lasts more than several minutes. Nevertheless, it is considered to be one of the most awe inspiring spectacles in all of nature. The sky takes on an eerie twilight as the Sun’s bright face is replaced by the black disk of the Moon. Surrounding the Moon is a beautiful gossamer halo. This is the Sun’s spectacular solar corona, a super heated plasma two million degrees in temperature.

A total solar eclipse can last for several hours. Totality can range from a few seconds to 7.5 minutes. The longest total solar eclipse of the 21st century took place on July 22, 2009 when the totality lasted 6 minutes and 39 seconds. A partial solar eclipse occurs when only the penumbra (the partial shadow) passes overhead. In these cases, a part of the sun always remains in view during the eclipse.

But every 173.3 days (roughly every 6 months), the new Moon passes through one of two crossover points (nodes) where the Moon’s tilted orbit intersects the ecliptic. Here, at last, a solar eclipse is possible, though the Moon can pass through a node without the eclipse being total or annular — a partial eclipse can occur instead.

Looking directly at the sun, even when it is partially covered by the moon, can cause serious eye damage or blindness. Never look at a partial solar eclipse without proper eye protection.

As the sun and moon affect the tides on the Earth quite significantly and the fact that the human body is made up of mainly water, it is only common sense that any eclipses would affect the chemical balances within our bodies and thus affect our behavior.

Believers say that just as the moon moves the oceans and tides, pulling them in and out, they feel that it can have the same type of pressure on humans as we are composed of around 60 to 75 percent water according to age and body type. In some ancient spiritual traditions the two days prior and two days after the day of an eclipse – both solar and lunar – are also viewed with cautious respect and appropriate conduct. Within some religions it is considered quite unfavorable to begin any new venture or to inaugurate a project during the entire five day period surrounding the eclipse.

A Solar Eclipse is about new beginnings regarding our beliefs, acceptance of others, and letting go of past hurts. With this eclipse, we might experience a strong urge to act on impulse. However, it will be important to avoid jumping to conclusions and asserting ourselves without considering others’ feelings and reactions. Not everyone will feel the effects of the eclipse with the same intensity. Those whose personal planets are activated by the degree of the eclipse will feel its effects on a personal level the most.