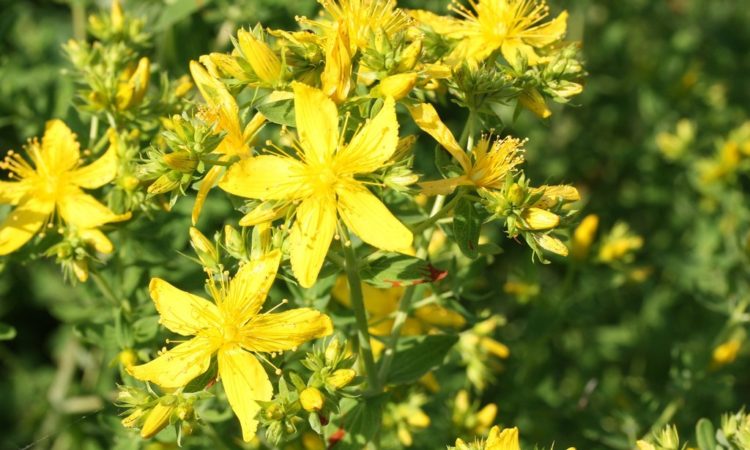 St. John’s Wort is a powerful herb that has flowers and leaves that are used in medicines, a tea, and a vitamin supplement. St. John’s wort is native to Europe but is commonly found in the US and Canada in dry ground areas of meadows, woods and unattended gardens as it was considered a weed when first discovered.  It is now mainly grown in Australia.  St. John’s wort dates back to the ancient Greeks.

St. John’s wort is a plant with yellow, star-shaped flowers and five petals that grows in Europe, North and South America, Australia, New Zealand, and Eastern Asia. The plant grows in sunny, well-drained areas. It grows to be 50-100 cm tall.

St. John’s wort might cause serious interactions with some drugs. Because of this, France has banned the use of St. John’s wort in products. Several other countries, including Japan, the United Kingdom, and Canada are in the process of updating warning labels on St. John’s wort products.

St. John’s wort is most commonly used for depression and conditions that sometimes go along with depression such as anxiety, tiredness, loss of appetite and trouble sleeping. There is some strong scientific evidence that it is effective for mild to moderate depression.

St. John’s wort has been tried to help quit smoking, for fibromyalgia, chronic fatigue syndrome (CFS), burning feelings in the mouth, migraine and other types of headaches, muscle pain, nerve pain and nerve damage throughout the body, pain that travels down the sciatic nerve in the leg, and irritable bowel syndrome. It is also used for cancer (including brain cancer), HIV/AIDS, hepatitis C, herpes simplex, to help with a procedure to unblock clogged arteries, weight loss, and to treat a disease that causes the skin to lose color.

An oil can be made from St. John’s wort. Some people take this oil by mouth for indigestion. Some people apply this oil to their skin to treat bruises and scrapes, inflammation and muscle pain, scaly and itchy skin (psoriasis), first degree burns, wounds, tooth pulling, bug bites, hemorrhoids, nerve pain, and to treat a disease that causes the skin to lose color. But applying St. John’s wort directly to the skin is risky. It can cause serious sensitivity to sunlight.

The active ingredients in St. John’s wort can be deactivated by light. That’s why you will find many products packaged in amber containers. The amber helps, but it doesn’t offer total protection against the adverse effects of light. (WebMD)

Join us at www.secretserendipity.com.  We love St. John’s wort as a tea.