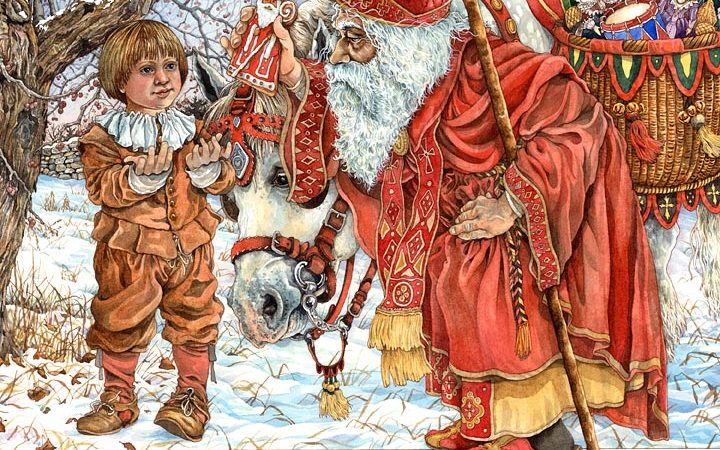 How did the magical Christmas character, who is so giving, begin? Legend has it that a pipe-smoking Nicholas was known to soar over the rooftops in a flying wagon, delivering presents to good girls and boys. During Victorian times and before that, he wore a range of colors (red, green, blue and brown fur) but red was always his favorite. It wasn’t until the 19th century that the image of Santa became standardized as a full size adult, dressed in red, with white fur.

But who was this “Nicholas?”

Nikolaos of Myra was a historic 4th century Christian saint and Greek Bishop of Myra. His wealthy parents died in an epidemic while he was still a young boy. Obeying Jesus’ words to “sell what you own and give the money to the poor,” he used his whole inheritance to assist the needy and the suffering. Throughout his lifetime, he did many kind and generous deeds in secret, caring for those in need, expecting nothing in return.

His legendary habit of secret gift-giving gave rise to the traditional model of Santa Claus. He would put coins in the shoes of those who left them out for him. He is commemorated among Catholics, Lutherans, Orthodox Christians, Baptists, Methodists and Presbyterians.

Many countries celebrate St. Nicholas’ Day on December 6th. Children leave their shoes or boots out on the 5th to be filled with presents by St. Nicholas. Nice children receive treats, naughty children receive coal from Krampus, who punishes children who have misbehaved. Depending on the cultural background, in some families this celebration is still more important than Christmas.

In Germany and Poland, St. Nicholas’ feast day keeps alive many stories of his goodness and generosity. He is named the patron saint of more causes than any other saint. As the patron saint of children, there are many stories of children rescued from calamity and returned to the care and keeping of their families. He is also celebrated as the patron saint of sailors. During his lifetime, he appeared to sailors, off the coast of Turkey, who invoked his aid and brought them safely to port. He had ordered the sea to be calm, and the storm died away. The sailors were then able to sail their ship safely to port.

Through the centuries, many stories and legends have been told of St. Nicholas’ life and deeds. These accounts help us understand his extraordinary character and why he is so beloved and revered as protector and helper of those in need. Since St. Nicholas projects a spirit of generosity and love, people have been giving presents in his name on his feast day, December 6th.

The giver of every good and perfect gift has called upon us to mimic Gods giving, by grace, through faith, and this is not of ourselves. ~ St. Nicholas of Myra

We at www.secretserendipity.com along with everyone else, love Santa Claus. But Santa Claus belongs to our childhood, St. Nicholas models for all of our life.