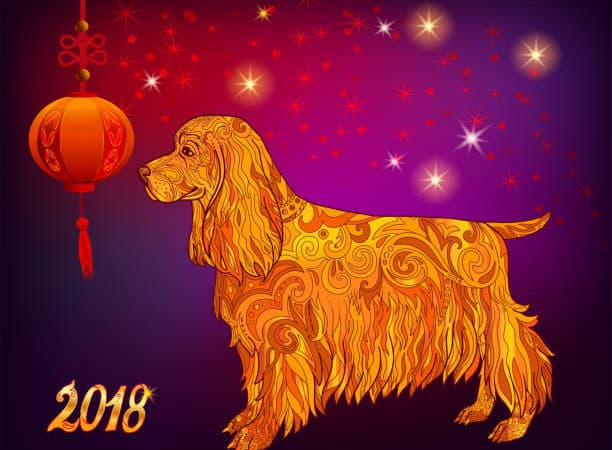 The Dog is one of the twelve-year cycle of animals that appears in the Chinese Zodiac, as related to the Chinese calendar. The Chinese Year of the Dog begins on February 16, 2018 and ends on February 4, 2019.  In Chinese culture, dogs are regarded as auspicious animals and bring good fortune when they visit your home. The Year of the Dog is a time for friendly, loyal, smart, and honest people to come together for the good of all.

The Year of the Dog is a time when people become determined to counter any injustices that they witness, or are victims of. They tend to show aggressive qualities, especially when their tempers are flared or their loved ones are in need of protection. Luckily, one can usually be sure that during the Year of the Dog, the Dog’s bite is not as fierce as its bark.

The primary element of the sign of the Dog is the Earth element, followed by secondary forces provided by Fire and Metal. The creative cycle of Fire, Earth and Metal means that money can come to those who decide to choose honesty and fairness in their dealings. 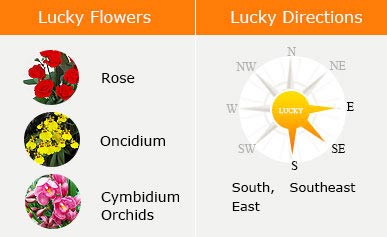 Loyal, faithful, and true, the people living in the Year of the Dog understand the importance of friendships. As such, they often inspire confidence as they are always willing to help those in need.

The Year of the Dog 2018 is an opportunity for the Dog to consolidate his achievements and to renew his motivation. In 2018, happiness is at the door of the Dog, and one only needs to reach out to grasp it. 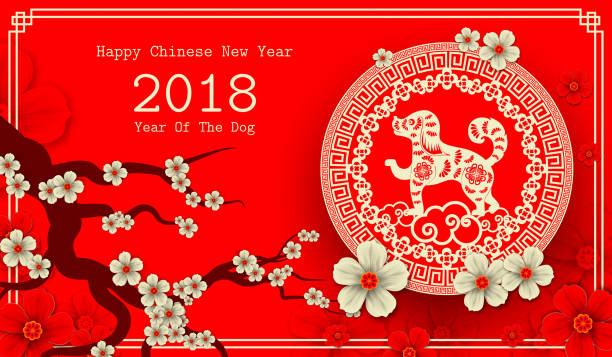 Those Born in a Year of the Dog

Those born in one of the Years of the Dog are people that are not showy. Their role is more apt to be as good listeners, and they usually make good companions for the more demonstrative or gregarious personalities of the Zodiac. Any tendencies to take, take, take is replaced by a widespread sentiment of generosity and selflessness. In general, they are all blessed with the Dog’s keen sense of right and wrong. 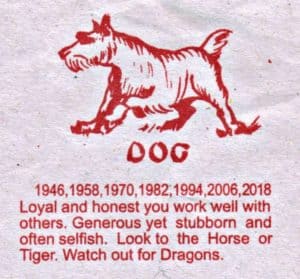 2018 Year of the Dog Personality Traits

Dog People are generous but somewhat selfish, terribly stubborn, and eccentric. Whether he’s a lapdog or a stray, there’s always a touch of the hippie about him, and it doesn’t worry him at all to be without the material comforts. Even when he’s in the money, his tastes are simple enough.

In love, the Dog is honest and straightforward. But he will have romantic problems all his life, it’s his own fault. Romantically, he gives the impression of being a cold fish but this appearance is misleading, it’s just that he’s anxious and he doubts his own feelings as he does those of others. He provokes them himself by his emotional instability and his eternal anxiety.

Throughout history, the champions of justice have always been born under the sign of the Dog.

Chinese Year of the Dog Gifts 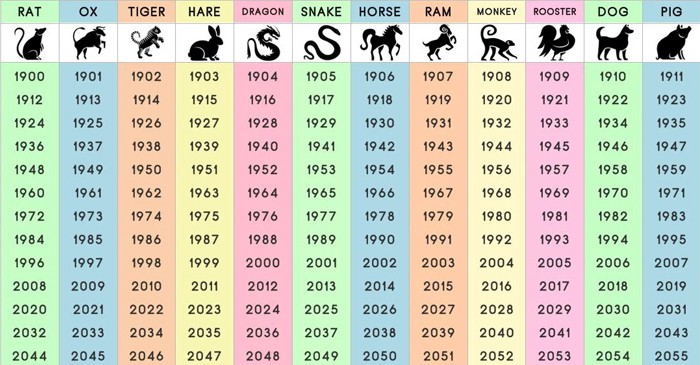 Follow us at www.secretserendipity.com for more on Chinese Astrology.