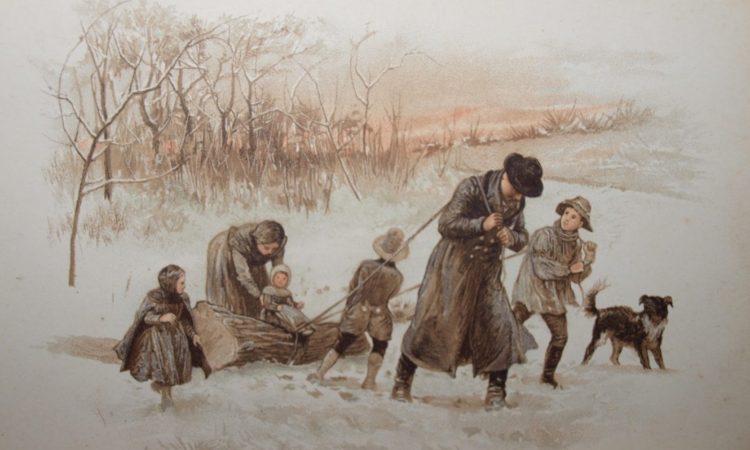 The Yule Log began as an ancient Celtic tradition of celebrating the Winter Solstice. Yule is the name of the old Winter Solstice festivals in Scandinavia and other parts of northern Europe and Germany. The head of the family would find a tree trunk or an enormous large branch and would burn it on the shortest day of the year. The largest end of the log would be placed into the fire hearth while the rest of the tree stuck out into the room. The act was a way of celebrating the rebirth of the sun as well as giving thanks for the warmth and life it would bring with it. The Celts believed that trees had mystical powers and would bring good luck to the next harvest.

As an ancient tradition originating in Europe, the Yule Log warmed the house during the cold Christmas night. The family would gather around the hearth for Christmas. Children sang songs and stories were told by their grandparents while a log burned in the fireplace. Decorated with leaves and ribbons, it was lit by the youngest and the oldest family members after being blessed by the head of the family with oil, brandy, and sometimes with a branch that had been dipped in holy water. After the burning, the ashes were saved because they would protect the home from lightening and the devil in the upcoming year.

The Yule Log has its roots in Germanic and Anglo-Saxon paganism. Like the Christmas tree, the custom has been picked up and worked into the Christian Christmas holiday. In England, families would sit around the open hearth, burning the Yule Log, as well as a packet of kindling, that would signify good luck for the year to come. In parts of Spain, specifically Catalunya and some Aragon regions, parents set up the log at Christmas time, and made believe that it defecates small presents when children hit it with a stick. Priests in Serbia offer liturgies when putting the Yule Log (Badnjak) on the fire. In France, families burn the Yule Log every night for the 12 nights of Christmas, keeping the leftover remains locked up for good luck.

Burning a Yule Log is the oldest Christmas tradition there is. In many celebrations, the Yule Log became a smaller branch or small log, placed in the center of the Christmas table. Candle holders were placed around the branches or a Yule Log might be drilled to hold three candles. The colors of the candles are red, green and white and are surrounded by pine cones, cinnamon sticks, greenery and small cakes that were given to guests as treats.

Throughout the years, hearths eventually got smaller and turned into stoves. The Yule Log was supposed to burn for 12 hours. The log didn’t always burn that long so the tradition of a cake began and was intended as a way to stretch it out. Many new houses were not built with fire places so there was nowhere to burn an actual log, and many homes created a cake log as a replacement.

The Yule Log of today, made to resemble a tiny tree log, is a popular Christmas dessert. It is made of a chocolate sponge roll, layered with cream. The outside is covered with shaved chocolate from a vegetable peeler, and chocolate buttercream icing and decorated to look like a bark-covered log. Yule Log cakes have been a classic Christmas confection since the 19th century.

“Christmas is the season for kindling the fire of hospitality in the hall, the genial flame of charity in the heart.” ~ Washington Irving ~