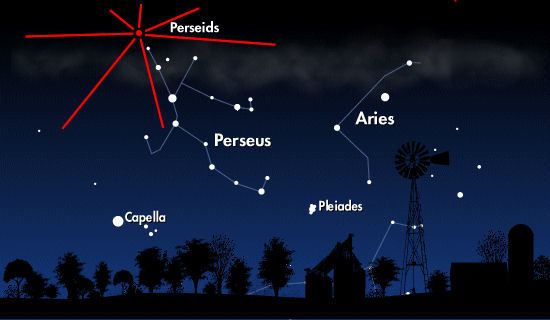 The Perseids is one of the best meteor showers to observe, producing up to 60 meteors per hour at its peak. It is produced by comet Swift-Tuttle, which was discovered in 1862. The Perseids are famous for producing a large number of bright meteors. The shower runs annually from July 17 to August 24. It peaks this year on the night of the 11th, 12th, and the morning of the 13th.

The Second Quarter Moon will block out some of the fainter meteors this year, but the Perseids are so bright and numerous that it should still be a good show. Best viewing will be from a dark location after midnight. Meteors will radiate from the constellation Perseus, and can appear anywhere in the sky. Meteors in annual showers – which come from streams of debris left behind in space by comets – typically lasts weeks, not days. Perseid Meteors have been streaking across our skies since around July 17th.

Perseids are the “Old Faithful” of Meteor Showers!

The Perseids are the “Old Faithful” of meteor showers. That’s worth remembering, even if a Last-Quarter Moon interferes somewhat with this beloved meteor display at peak activity, which is expected on the morning of Aug. 12th. Otherwise, an observer might witness more than a meteor a minute in a clear, dark sky.

Most of these “shooting stars” would be identifiable as Perseids because their paths, extended backward along the line of flight, would intersect near a point in northern Perseus. Better viewing conditions will come a few mornings after the 12th, when predawn skies are darker, but the shower will be much diminished by then.

Meteor showers symbolize beauty rising from the ashes. Meteor showers represent the spiritual insights and wisdom gained from looking deep within the shadows of ourselves and our world. They also invite us to create new ideas and beliefs. They’re like little bursts of “aha”moments. You love your independence, and this Perseid period will be bringing that to the forefront of your consciousness.

There are a number of positive changes that often occur after this amazing meteor shower. It’s a time when you’re likely to be inspired to find an innovative solution to a troubling problem. Even though you may have been muddling along not knowing whether to change careers, make a commitment to a new relationship or move to a new city, suddenly your vision as to what to do is clear.

Honor the Abundance of this Season!

Activate your night owl or early bird and go star gazing before dawn on Tuesday and Wednesday. There is nothing like the twinkling star light to communicate an expanded perspective to our psyche. Blend up a blueberry smoothie or make blueberry pancakes to honor the abundance of the season!

More info on the Meteor Shower!