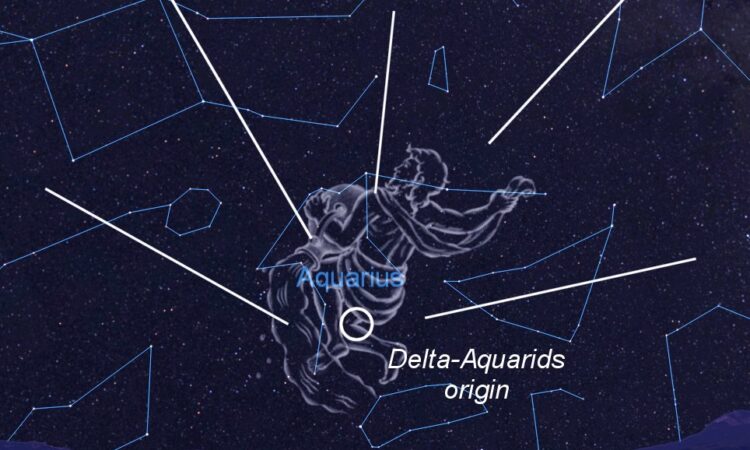 The July 28 and 29 2020 – Delta Aquariids Meteor Shower, can light up night skies from dusk to dawn, and if you’re lucky, you might be able to catch a glimpse.

The Delta Aquariids is a meteor shower that can produce up to 20 meteors per hour at its peak. It is produced by debris left behind by comets Marsden and Kracht. The shower runs annually from July 12 to August 23. It peaks this year on the night of the 28th and morning of the 29th.

For the Delta Aquariids, as for most meteor showers, the best viewing hours are after midnight and before dawn for all time zones around the world. About 5% to 10% of the Delta Aquariid meteors leave persistent trains, glowing ionized gas trails that last a second or two after the meteor has passed. The numbers of random, or sporadic meteors will vary from season to season, due to the tilt of the Earth on its axis.

A Falling or Shooting Star!

A “falling star” or a “shooting star” has nothing at all to do with a star! These amazing streaks of light you can sometimes see in the night sky are caused by tiny bits of dust and rock, that we know as meteoroids falling into the Earth’s atmosphere and burning up. That is why Meteors are often called falling stars or shooting stars.

The Delta Aquariids are active beginning in mid-July and are visible until late-August. Meteors come from leftover comet particles and bits from broken asteroids. Every year the Earth passes through these debris trails, which allows the bits to collide with our atmosphere where they disintegrate to create fiery and colorful streaks in the sky.

The Constellation Aquarius and the July 28 and 29 2020 – Delta Aquariids Meteor Shower!

The name of a star, Delta, is part of this shower’s name in order to help distinguish it from another meteor shower, the Eta Aquariids, which peaked in May. Delta Aquariid meteors appear to radiate from the constellation Aquarius the Water Bearer, which, as viewed from the Northern Hemisphere, arcs across the southern sky.

This Delta Aquariid meteor shower opens a pathway to hope and guidance in building stronger relationships with others. When you are uncertain of what to do, listen to your gut. You can’t change how others feel about you, but you don’t have to let them make you feel insecure about yourself. Take this time to listen to the wisdom the Universe is offering you. Meditate, journal or just watch.