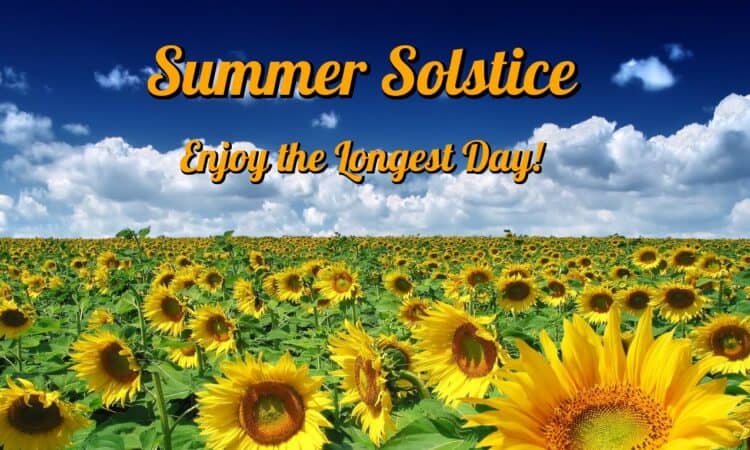 The June 20 2020 Summer Solstice marks the beginning of the season that contains the utmost bounty, abundance, and beauty. It is a time for you to be more of an observer of your thoughts than the thinker of them. Quiet your mind and spend time in nature reconnecting yourself. This June Summer Solstice can be a very healing time and a very welcoming time, if you let it.

Solstices happen twice a year – in June and December. The June Solstice happens around June 20, when the Sun is directly overhead the Tropic of Cancer. It is the only day of the year when all locations inside the Arctic Circle experience a continuous period of daylight for 24 hours. Due to atmospheric refraction, however, the midnight sun is visible for a few days before and on the June Solstice from areas as far as 60 miles (97 kilometers) south of the Arctic Circle. As one moves further north of the Arctic Circle, the number of days with the Midnight Sun increases.

Solstice comes from the Latin words sol, meaning Sun and sistere, meaning to come to a stop or stand still. On the day of the June Summer Solstice, the Sun reaches its northernmost position, as seen from the Earth. At that moment, its zenith does not move north or south as during most other days of the year, but it stands still at the Tropic of Cancer. It then reverses its direction and starts moving south again.

Celebrations surrounding the June Solstice have a time-honored history. In ancient times, the date of the June Solstice was used to organize calendars and as a marker to figure out when to plant and harvest crops. Traditionally, this time of year was also popular for weddings. Some historians point to the Stonehenge, a prehistoric monument in Wiltshire, England as evidence of the fact that ancient humans used the June Solstice as a way to organize their calendars. Some believe that Stonehenge’s unique stone circle was erected around 2500 BC in order to establish the date of the Summer Solstice.

A Candle Ritual During Solstice!

This ritual is best performed right at the moment the sun rises. If you’re unable to pull yourself out of bed at such an early hour, any time of day will do. All you’ll need is one candle and the willingness to look deeply into your heart. When you wake up, go outside or gaze out your window. Light your candle(s) and take in the sunrise. Appreciate the way the light colors the sky with hues of orange and pink. Allow the morning air to fill your lungs with clarity. Think about everything in the world that you’re grateful for. Think of your family, your friends, your favorite flowers, your favorite books, your favorite things, etc. Hang on to the beauty of this moment. You have so much magic surrounding you.

We are currently in a time of disharmony. This can cause stress and negativity in your life. Do not dwell on the things that are happening right now. Don’t worry about the things that have already happened. Instead, focus on how you can make adjustments, grow, and make the changes necessary to be ahead of the game. Try to accept people as they are and listen with the intention of finding out new things, to understand, to really see the person in front of you.

Look to Nature for Guidance during the June 20 2020 Summer Solstice!

If we look to nature for guidance, everything is alive and vibrant under the Sun. Soon, the leaves will start to turn brown and we will enter into a new point in the cycle of life and death. Life is forever changing, and nothing ever stays the same. While our time under the rays of the warm Sun is beautiful and bright, eventually we will reach a point where we have expressed ourselves all we can, and the time will come to retreat within. It will begin a time of introspection.

Join us at “SecretSerendipity” for More Insight!