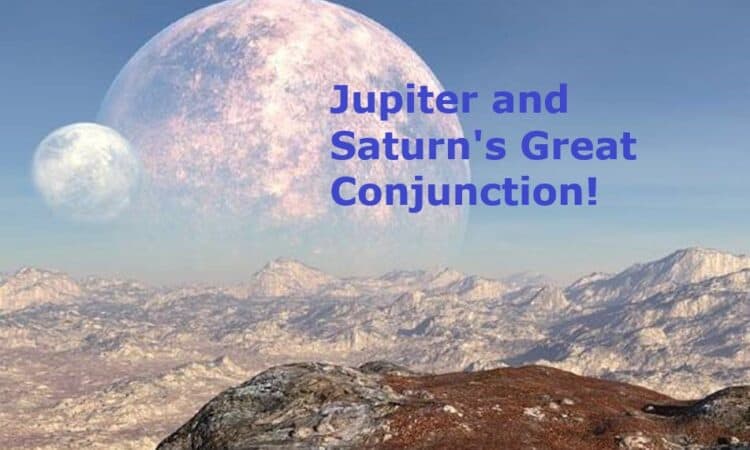 Jupiter and Saturn’s Great Conjunction – these two giants are headed for a December 21st – 2020, close encounter.

Conjunction of Jupiter and Saturn!

Saturn completes its one Zodiac cycle every 30 years, and Jupiter takes around twelve years to complete its cycle in all the Zodiac signs, after which it returns back to its original place. This is known as a Great Conjunction. Thus, their conjunction is considered to be an extraordinary event. A Jupiter-Saturn conjunction is rare enough for observers to take notice of this unique pairing.

Jupiter and Saturn’s Great Conjunction – This is also the Date of the Winter Solstice!

Jupiter and Saturn’s Great Conjunction – A Time for Justice for All!

This conjunction is special because it’s in Aquarius, the sign of social change, humanitarian efforts, and justice for all. If you are not open to change, it will feel uncomfortable to you. Expect people to come into your life to teach you, be aware of this. Aquarius is the reformer, the freedom fighter and the humanitarian. This new Aquarius consciousness will be about universal awareness and the integrating of idealism into your life.

It’s the Dawning of the Age of Aquarius!

There are lots of interpretations about what actually signals the dawning of the Age of Aquarius in astrology, but many astrologers believe that it refers to 2020’s rare alignment of Jupiter and Saturn. With the dawning of the Age of Aquarius, we will experience new ways of being and new ways of doing things that affect every area of our lives. This new age may be about change but the real emphasis will be how we respond to it – and how we align ourselves in future years.

Jupiter and Saturn’s Great Conjunction – It is a Time to Look for Answers!

With the Great Conjunction and Winter Solstice in sync, the effects of both are amplified, and that makes it perfect for doing a ritual, checking your tarot cards, or just writing down what you most want to manifest in the coming year. Tarot cards can help a person understand what he or she needs to know about a particular situation. Tarot cards can be an act of meditation for situations a person wants to find answers to. Drawing cards helps discover new ways of thinking.

The conjunction of Jupiter and Saturn will mark a major impact on the ninth and the third house, due to religious activities that will increase, and major political and religious decisions will be declared by the courts. During this period, power struggles and public demonstrations to strengthen the democratic foundation will be seen in major parts of the world. At the same time, the world could go through a period of economic recession.

There is a “social change” aspect of this conjunction. The energies of Saturn and Jupiter are a massive case study in tensions. Saturn is the task-masker and father-figure who taps us on the hand and wants us to play by the rules. Jupiter is our expansive, charming, slightly intoxicated uncle at family dinners who inspires us to be more, do more and share more. The ongoing relationship between these two planets marks major phases of our developing life’s work, and the conjunction, in particular, is a time when we can form a new sense of social purpose or direction. They also signify our search for success in all of our activities.

In the 1500’s, Nostradamus wrote some of his verses called the ‘Quatrains’ based on the cyclic patterns of Jupiter and Saturn. He wrote of warnings involving revolutions and internal turmoil in nations around the world. Cleaning up our respective messes is exactly what Nostradamus hoped would happen once we became aware of his warnings. He stated that the world will enter a new golden age, or the true Age of Aquarius, as measured by some astrologers who believe its beginnings will start in the 2020’s.

More on the Jupiter and Saturn Conjuction