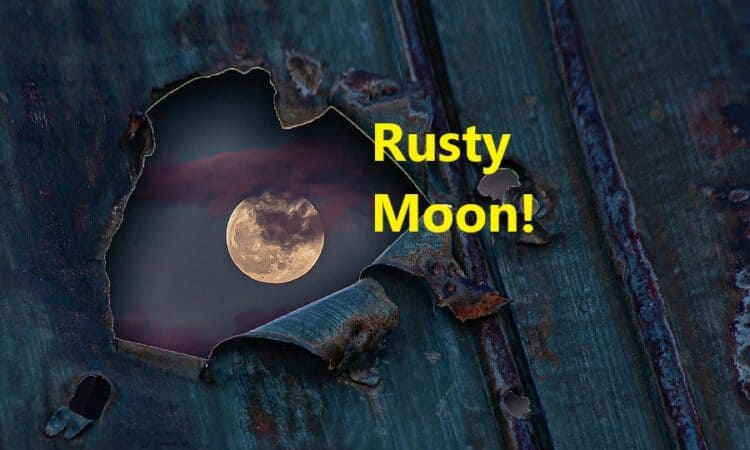 The Rust Moon – Scientists have discovered rust on the Moon, something they did not believe was possible!

Rust Moon – Traces of Rust are Found on the Moon!

India’s Lunar Probe, Chandrayaan-1, orbited the Moon in 2008, gathering information that has led to many discoveries over the years – including the discovery of water molecules on its surface. The probe also included a device developed by NASA that can analyze the mineral composition of the Moon. Researchers at NASA just recently analyzed the data and were surprised to find traces of hematite, a form of iron oxide known as rust. Iron-rich rocks are abundant on the Moon – but iron only produces rust when exposed to oxygen and water!

Mars has long been known for its rust. Iron on its surface, combined with water and oxygen from the ancient past, give the Red Planet its hue. But scientists were surprised to find evidence that our airless Moon has rust on it as well. One explanation being considered is that lunar hematite is formed through oxidation of lunar surface iron by the oxygen from the Earth’s upper atmosphere. This has been continuously blown to the lunar surface by solar winds when the Moon is in Earth’s magnetotail during the past several billion years.

The Sun always illuminates exactly one-half of the Moon, but we see it at different angles as it rotates around Earth. With the naked eye, we can see only the part of the Moon that the Sun is illuminating. For instance, a Crescent Moon is what we call the Moon when we see only a small portion of its illuminated surface. When the Sun rotates, it sprays charged particles into the solar system. Some of them bombard the Moon’s surface and kick up water molecules that bounce around to new locations.

Rust Moon – The Light of the Moon!

Today, there is an ever-increasing number of people who are connecting with the Moon as part of their spiritual practice. The Moon interacts all the time with the emotional center in one’s consciousness, and with the Sun, which represents the higher Self. The light of the Moon is borrowed from the light of the Sun, just as the light and energy of one’s lower self is borrowed from the higher or spiritual self.

The Moon and Emotions!

It’s believed that the Moon’s cycle can affect the way you feel about things, in particular your emotions. When the Moon is Full or New, both males and females can experience dramatic changes in their moods and behavior. Although the scientific evidence is yet to be gathered, we’ve all heard the evidence of more admissions to hospital emergency rooms and more call-outs for police during the Full Moon.

Releasing and clearing are powerful practices to employ during the Moon’s cycle. This removes any built up negativity that has accumulated and cleanses the environment, and us, for what we are going to have flowing into our lives in the next Moon cycle. Smudging is a way to energetically cleanse a space to invite positive energy.

When Smudging, light the end of the sage bundle and blow on it until there is a smoldering glow. Use it around your own body, and in the space of your ritual. Choosing to sit and let go of negative thoughts in a ritual like this sets your intention and dedication to self-improvement. This is the best time to reflect and release positive Karma energy while celebrating the vibrations of the Moon. When you’re finished, extinguish the smudge stick by snuffing it out inside of the shell used to keep the stick safe from harm.

More on the Rust Moon