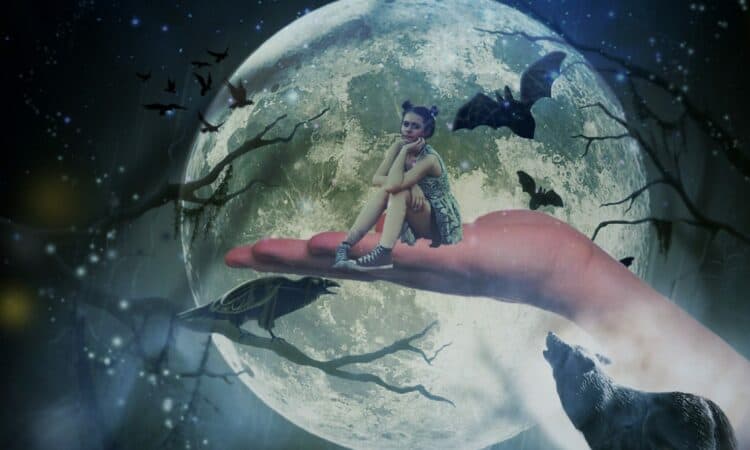 January 10, 2020, brings a Full Moon in Cancer. During a Full Moon, the Moon is 100% illuminated, as seen from Earth, and is on the opposite side of the Earth from the Sun. On January 10th, this Full Moon will be visible throughout the night sky, rising at sunset in the east and setting with the sunrise the next morning.

The early Native American Indians did not record time by using the months of the Julian or Gregorian calendar. Many tribes kept track of time by observing the seasons and lunar months, although there was much variability. Native American Indians gave names to each of the Full Moons to keep track of the passing year. The names they gave the Full Moon each month are associated with the entire month until the next Full Moon occurs.

A Full Moon – Nature and the Seasons!

Native American Full Moon names are related to nature, the seasons, hunting, fishing, and farming. The Full Moon in January is the Wolf Moon, named after howling wolves, which may stem from the Anglo-Saxon lunar calendar. The wolf has the ability to endure the brutality of the cold very well. January’s other names for its Full Moon: Moon After Yule, Old Moon, Ice Moon, and Snow Moon. Other names for the January Moon include: the Cold Moon and the Great Spirit Moon.

The January Full Moon is called the Wolf Moon. Wolves howl to communicate over long distances both in North America and in Europe. It is a way of saying “here I am” to the rest of the pack or “stay away” to intruders. While an average howl from a single wolf lasts from 3 to 7 seconds, a chorus by a pack can last from 30 to 120 seconds and longer during the breeding season in February. So wolves are particularly loud and vocal in the first months of the year, which is probably why people associated the month of January with howling wolves. Wolves howl in the direction of the Moon. They point their faces toward the sky for better acoustics, because projecting their howl upward carries the sound farther.

January’s Full Moon is also referred to as the Moon After Yule. Old Almanacs in England used a series of poetic names to refer to each Moon of each month, and of the entire year. This began with the “Moon after Yule”, the name given to the first Full Moon after the winter solstice, and finished with the “Moon before Yule”, the last Full Moon before the following winter solstice. The Full Moon after Yule brings a rejoicing that, even in the darkest time, the sun is not vanquished. Sol Invictus — the Unconquered Sun — is seen once again, staining the horizon with the promise of hope and brilliance.

The Full Moon of January is known to some as the Old Moon as it is seen amid the cold and deep snows of midwinter as the wolf packs howled hungrily outside of villages. This Full Moon is also known as the Moon’s “ashen glow” or “the old Moon in the new Moon’s arms.” It is where the gibbous part of the Moon is illuminated slightly by Earth-shine, the reflected sunlit from the Earth. Thus, the bright crescent New Moon wraps around and “holds in its arms” its dim gibbous part, also known as the Old Moon.

The Ice Moon and Snow Moon are other names of this January Full Moon. It is believed by some tribes that the the light of the Full Moon of January can heat the upper atmosphere and evaporate cloud moisture that would ordinarily trap heat escaping from earth, thus facilitating radiational cooling that could lead to Winter’s ice, snow and frost. This Full Moon’s symbols remind us that the colder months are a perfect time to take stock of the challenges we face and what might be keeping us from reaching what we want.

The reduced light, warmth, and color of winter, leaves lots of people feeling a little more melancholy and tired. If the winter blues are about lack of daylight, it’s no surprise that treatment usually involves getting more light into your life. If you feel low in winter, get outside as often as you can, especially on bright days. Sitting by a window can also help. But being around other people to share a meal, a laugh, and a little love is a super important part of feeling positive and connected through the darker months of the year.

Scented candles are a lifesaver during the winter. The house can smell like baking cookies or you can be whisked away to an ocean front. The power of smell is truly transforming. Whatever you plan, get out and about, enjoy your life, your family and your friends, as we are all waiting for sunnier days to come.